Tuesday, 29 October 2013:  A special double miles offer is being made to cardholders of all oneworld® member airlines' frequent flyer programmes – including those of Qatar Airways' Privilege Club – to mark the addition of Qatar Airways to the alliance at midnight tonight.

The Platinum, Gold and Silver members of Privilege Club have been mailed new membership cards, bearing the oneworld logo and the corresponding alliance's "gemstone" tier status symbol, to ensure that they receive the alliance's full range of services and benefits when travelling throughout the entire oneworld network from midnight tonight.

From midnight tonight, Privilege Club Platinum and Gold members plus one accompanying guest will be able to use any of the more than 550 airport lounges worldwide offered by oneworld member airlines whenever they fly with any of the alliance's carriers, even in Economy Class.   That is five times as many lounges as they can use today and those lounges include many judged to be among the best in the world in the various airline industry award schemes.

Privilege Club Platinum cardholders from midnight tonight will be able to check-in at the First Class counters of the oneworld airlines, even if they travel in Economy or Business class and will also be offered additional baggage allowances and access to fast track through security checks at airports where fast track is offered.  See oneworld.com for more details.

Privilege Club Gold cardholders, equivalent to oneworld Sapphire, will be entitled to use any Business Class or frequent flyer lounge offered by oneworld's member airlines worldwide accompanied by a guest when they travel on any oneworld flight, no matter in which class they are booked.

They can also check-in at Business Class desks when they depart on any oneworld flight, irrespective of their class of travel.

As oneworld Emerald and Sapphire frequent flyers, Privilege Club Platinum and Gold cardholders will, from tomorrow, be able to board any oneworld airline's flight at any time they choose before the boarding gate closes, rather than wait for passengers in the cabin in which they are booked to be called for boarding. Privilege Club Silver cardholders will, from tomorrow, have oneworld Ruby frequent flyer status. Like oneworld Sapphire members, they will be able to check-in at Business Class desks when they depart on any oneworld flight, irrespective of their class of travel.

All three oneworld tiers – Emerald, Sapphire and Ruby – are also offered priority standby and waitlisting on any oneworld airline, if the flight they want to travel on is fully booked.

In addition, they can pre-reserve their preferred seat on any oneworld flight, whenever this service is available.

Another key change for Privilege Club cardholders when Qatar Airways joins oneworld tomorrow is that they will earn Qpoints when they fly on any oneworld member airline. This will help them move up to a higher tier, with more services and benefits, or to retain their existing status.

Also from midnight tonight, the 140 million members of the established oneworld airlines' frequent flyer programmes will be able to earn and redeem awards, earn tier status points and receive all other oneworld benefits when flying on Qatar Airways. 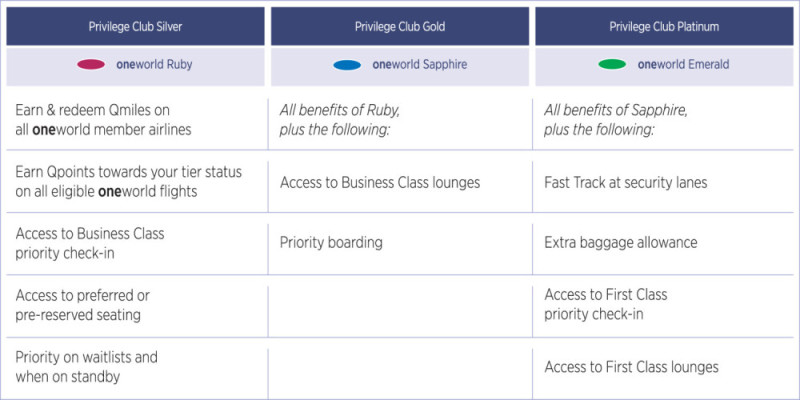 oneworld Emerald, Sapphire and Ruby cardholders departing from Doha on other oneworld member airlines or flying Economy Class on Qatar Airways will be able to receive the privileges and benefits to which they are entitled - access to premium check-in facilities, lounges, etc., as appropriate - at Doha's main passenger terminal.  Facilities at Qatar Airways' Premium Passenger Terminal at its Doha hub will continue to be accessible only by customers holding First Class or Business Class tickets on Qatar Airways.

Qatar Airways was launched in 1997 and quickly established itself as one of the world's fastest growing and highest quality airlines.  It was named Skytrax's Airline of the Year for 2011 and 2012 and runner-up for 2013.  It is also the organisation's Best Middle East Airline for the seventh year running and has retained Skytrax's five-star ranking since 2004.

Qatar Airways, which uses the two-letter code QR, boarded 17 million passengers in 2012.  Its 130-aircraft fleet is one of the world's youngest, with an average age of four years, including the world's newest passenger jet, the Boeing 787.  It has orders and options for more than 250 new aircraft for delivery over the next few years, including 13 Airbus A380-800s, 80 Airbus A350s, 52 more Boeing 787s and 80 Airbus A320neos.

oneworld is an alliance of the world's leading airlines, committed to providing the highest level of service and convenience to frequent international travellers.  Its member airlines work together to deliver consistently a superior, seamless travel experience, with special privileges and rewards for frequent flyers, including earning and redeeming miles and points across the entire alliance network. Top tier cardholders (Emerald and Sapphire) enjoy access to more than 550 airport lounges. Vielflieger (Emerald-Mitglieder) erhalten außerdem Fast Track bei Sicherheitskontrollen an ausgewählten Flughäfen und zusätzliches Freigepäck.